Bridge is utterly compulsive once it has got hold of you. It isn’t too hard to learn and the joy is that you can play it and actually start enjoying it before you get very good. You can take it on at any level that you want.
The big problem is that very soon after you start you want to be brilliant.

Playing bridge is one of the most enduring and popular pastimes in the world and for over 100 years, and it has fascinated people of all types and from all walks of life. It is one of the most popular leisure activities in Britain, with around 300,000 people playing on a regular basis.

Bridge is recognised as a mind sport, and is partnership trick-taking card game of skill. It is played by four players who form two partnerships; the partners sit opposite each other at a table. There is an auction (often called bidding) and then the play, after which the hand is scored. The more tricks a partnership correctly predicts they will make the better their score - but if they do not make as many as they predict their opponents score points instead. In competitions the same hands are played at each table so you can compare your scores with the other partnerships and work out who did best with what they were dealt, thus almost eliminating the 'luck' aspect that exists in games such as poker. This video or this video will give an overview of the basics of the game.

This section will provide you with an introduction to the wonderful game of bridge, from details on the origins and history of the game to details of how to make the next step.

Marge: "Which part of the morning paper are you reading, Homer?"
Homer: "The bridge column [laughing] Oh, that South you never know what he’ll do next."

Certainly not Homer Simpson, but different people and ages are hooked by bridge, and it is a rapidly growing pastime with ever more individuals enjoying what the game has to offer. In these days of people becoming lost in electronic entertainment, such as box sets and social media, more and more people are returning to board and card games as families see the value of learning and playing together in a more social, interactive environment.

Many couples attend classes together, because bridge is a great inexpensive activity and it’s a wonderful way to make new acquaintances.

Finally, bridge is prominent throughout the celebrity and political world: from Bill Gates to Winston Churchill, and Omar Sharif to members of the band, Blur! Sharif is quoted as stating that, “Acting is my living, but bridge is my passion”, and Gates is a self-confessed bridge-obsessive:

Why do people play bridge?

Anyone who stops learning is old, whether at twenty or eighty. Anyone who keeps learning stays young. The greatest thing in life is to keep your mind young.

First and foremost, people play because they enjoy it. Playing bridge is a fun activity which you can enjoy with friends and family of any age, anywhere in the world. All you need is a pack of cards, a table, and some like-minded people.

Bridge players love the mental challenge. Each game played will offer a unique challenge of problems and solutions. Every single deal is different; every deal poses a new problem and the challenge of finding the solution is a great source of enjoyment - even more so if you find the answer! 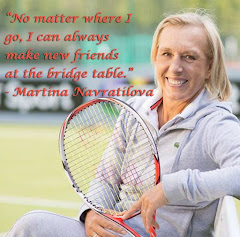 The American Jazz composer Duke Ellington famously said, “a problem is your chance to do your best", and it won’t come as a surprise to know that bridge players soon develop special skills in problem solving! It’s frustrating for players when they don’t rise to the challenge, but tremendous when they are successful – whether through finding great technical play, by outwitting their opponents, or by co-operating really well to achieve success with their partner.

Secondly, bridge is an excellent social game and can be played by everyone - players can meet new people, make new friends, take on new challenges and learn the game through the many bridge clubs and teachers.

Like participating in any sport - be it a 'physical sport', or a 'mind sport' - playing bridge is good for you mentally and physiologically.

Finally, you can play bridge anywhere! You can play locally and nationally; there are open, women’s and mixed; senior and junior events throughout the year. Next time it could be you!

There is so much potential to play this wonderful game!

Bridge is a sport based on skill, not luck

This article explains how bridge is based on skill, not luck. Unlike other activities involving cards, it is only good play, and not good cards, which means you will win.

The health and wellbeing benefits of Bridge

Recent academic work has shown a link between mental activity and maintenance - or even improvements - in mental health and wellbeing.

Research has found that the social interaction that can come from playing bridge can be a key to a long and happy life - this talk from TED explains more:

Research by Stirling University, in conjunction with the charity English Bridge Education and Development, found that playing bridge has a statistically significant positive effect on wellbeing. Other studies have found that activities such as playing bridge reduces the incidences of dementia (see here or here).

Bridge is also recognised as an important contributor to socialisation, with many people enjoying the 'community spirit' that exists within a bridge club. Recent research at the University of Leipzig found that those taking up new activities involving other people, are more likely to see an increase in their 'well being' than those who start solo pursuits.

The Educational Advantages of Bridge

The study commissioned by the EBU at St. Paul 's School in Manchester clearly shows a positive development of the young people involved. This study concentrated more on social skill development, rather than improvements of a purely academic nature. Experience shows that bridge teaches:

For young children the idea of grouping items is central to early learning in mathematics. In Mini Bridge and bridge cards have to be sorted into the four suits (

which, in turn, have a hierarchy and then into ranks within suits. This requires knowledge of the ranks (ace, king, queen and jack rank above 10, 9... 3, 2).

Counting points In Mini Bridge , adding the point count of the partnership hands to decide whether to try for part-score or game Counting suits as the cards are played. This is a very difficult concept for all but the best bridge players. At an elementary level it is only practical to count one suit (usually the trump suit) Calculating the score after each hand has been played.

There is opportunity to use probability at all levels of the game Knowledge of how cards split (with 5 cards out the likely split of 3-2 is 68%, 4-1 split is 28%, 5-0 split is 4%) Knowledge that a finesse is an evens chance, in the absence of other information.

Know from the allocation of points in Mini Bridge or by listening to the auction of opponents in bridge that one line of play may be superior over another Deduce that a finesse is a better line of play by using the opponents auction, even though numerically it may appear inferior.

Bidding and playing in turn Knowing that the absolute rule of card play is to follow suit when you can Keeping a `poker face' and not letting your emotions give away vital information.

Planning the play of the hand before playing a card to the first trick by using a SWOT analysis. In bridge this takes the form of Strengths: Counting your top winners Weaknesses: How many tricks you are short of your target Opportunities: Which suits offer the prospect of generating the additional tricks you need Threats: What can your opponents do to thwart your plans; what steps can you take to avoid danger Learning that in the bidding you must plan the way you will describe your hand.

Bridge requires concentration. You have to think about what you are doing, who bid what and who played which card It requires great mental stamina. At the highest international level you need to be able to play for 8 hours a day for up to a fortnight. The equivalent of 2 marathons a day for 2 weeks.

The English Bridge Union, in conjunction with the charity English Bridge Education and Development, works to bring bridge to as many people as possible.

The two organisations provide a range of Education services for all those interested in learning to play bridge, improving their game, or getting involved in teaching others. We also support people working within the bridge world, helping to set up and run bridge clubs, directing club games and so on. We are particularly keen to bring bridge to young people, and provide a variety of services to encourage young people into the game. We support groups of young players wherever they are located - within schools, universities and bridge clubs - as well as individuals wherever we can.
Find out more by following the links below.

What is your area of interest?

Some useless facts and trivia about bridge! Useful for any pub quiz..

People should be encouraged to take up bridge, gardening and Egyptology.

Do you have some useless bridge trivia? If so, please let us know by email.