Gordon Rainsford, Chief Tournament Director, wrote at the time of his retirement: "I’m very sorry to see Jim go. He’s been on the EBU TD panel for more than four decades and every TD who has ever worked with him has learned a huge amount from his hard work, attention to detail, knowledge of the Laws of Bridge and command of movements. I hope his retirement will give him time to play more bridge!"

Jim was interviewed for the October 2015 issue of English Bridge during the Summer Meeting in Brighton, in preparation for his 80th birthday, which he spent directing at Porthcawl Bridge Congress. That interview can be read here. 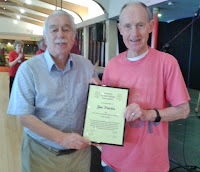 In July 2016 Jim received a commendation from the Yorkshire CBA. This was presented at the Scarborough Summer Congress - Jim was playing in the congress for the first time in many years having previous been chief TD at the event.

Jim wrote this biography in March 2015 when he was still active on the EBU panel of TDs.

"Jim was born in Wakefield in 1935 but was brought up in Skelmersdale, Lancashire, before it became a 'new town'. He was educated at Skelmersdale Methodist School, Ormskirk Grammar School and St John's College, Cambridge where he read mathematics. His first job was computer programmer in the civil service at Cheltenham.

He has lived in Scarborough since 1987 and is still enjoying tournament directing in his late 70s."