The Floriade and Bridge

Early this year, I received an email from the EBU about the first EBU River Cruise Congress, which would include a full day at the Floriade Expo in the Netherlands. I had never been to an overseas congress before, and my wife loves gardening but does not play bridge (!), so this looked like a great chance to combine a holiday with some bridge. I checked that the organisers would be able to find me a partner, persuaded Carolyn, and booked.

We travelled by Eurostar – which turned out to be a good decision as flights were cancelled or delayed – and met with four fellow travellers on the way.

The first impression was just how friendly everyone was. Clearly many of the others had met at previous congresses, but we felt part of the crowd as we mingled in the bar before the first dinner. In the restaurant we sat on a table with Kay and Michael, and a lone traveller also on his first Overseas congress – Angus. We all got on well, and despite not discussing this in advance (a common theme for the bridge), Angus and I both told the director (Eddy) that we would be happy to form a pair. We quickly agreed a system, and began to play.

As you might expect, the first two sessions were a bit shaky, as we tried to iron out our system and tune in to each other’s defensive methods. However, the main thing was that we were both having fun, so decided to stick with our partnership. Furthermore, Kay and Michael agreed to play in the Swiss Teams with us; I gave them strict instructions: enjoy the bridge, and don’t worry about the results! We won some and lost some, but maintained our positive outlook.

The full day trip to the Floriade Expo was fascinating. It is on a massive site, which will later be developed into new housing and farming, and included a virtual balloon ride over the wider district, a real cable car ride over the site and many different local and international exhibitions. The other half day trips to the Kinderdijk windmills and to the Belgium National Botanic gardens were also very interesting, and we had a half day for sightseeing in Antwerp.

Darren, one of the Arena host/guides gave us a lot of information about the Netherlands, and about the localities through which we passed. The food was good and plentiful – maybe too much so, as even I struggled to get through the cakes on offer in the afternoon.

I also attended a wide ranging seminar by Andrew Kambites, including a warning not to overbid misfits, or just bid 3NT on 25 points in pairs.

Finally, to the championship pairs, with a qualifying session, and A / B finals. Angus and I managed to cut down on the mistakes, and had a little luck, to qualify 3rd E/W for the A Final, which was played as an all-play-all Howell.

The final went even better!  As with most pairs events, some luck was needed, such as on this hand: 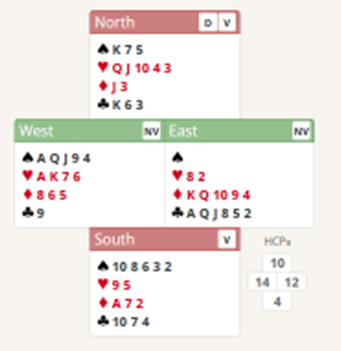 I was probably misinterpreting Andrew’s advice when I decided to bid 2S (Fourth Suit Forcing) rather than jumping to 3NT, and was a little concerned when partner jumped to a well judged 5C, but all was well! None of the (4) 3NT bidders succeeded in finding the double-dummy line for 10 tricks, while Angus was able to make 12 tricks when the club suit sat well; +420 scored 100%.

I was quite proud of my line to make 4S on this hand: 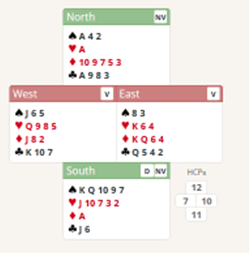 10 tricks look routine on any lead, but I thought the club lead gave me a chance for 11. I won the CA, cashed the HA, crossed to DA, and cross ruffed hearts and diamonds. At trick 9 I led another diamond from dummy and ruffed with S10. Sadly, this was over-ruffed and I was held to 10 tricks, along with nearly all the field!
I thought we had done quite well, but was still surprised when, as I entered the lounge for the prize giving, Angus indicated to me that we had won. I was then pleasantly surprised to be congratulated by many of our opponents, which I think just shows how very friendly everyone was on the trip.