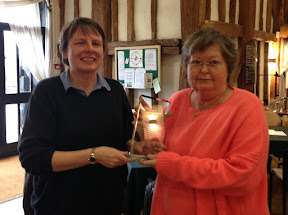 A few months ago I was sad to hear from Elena that she had decided that the end of 2015 would be the end of her time as Editor of English Bridge.

Elena took over and produced her first issue of English Bridge in August 2007 – showing firstclass judgement by having a photo of my team on the front cover!

She had an impeccable pedigree, having previously edited Bridge Plus and Mr Bridge’s BRIDGE magazine, as well as editing the bridge pages on Teletext. Since that time she has taken our magazine from strength to strength – introducing new and interesting columns, getting our best players to write for her, introducing a new online section to the magazine and making a host of other significant improvements. Perhaps the biggest challenge was adapting the magazine to its new size. She achieved the trick of not only saving the EBU and its members a very significant amount of money per issue but also receiving many comments praising the new format.

Elena has dealt with all her contributors, persuading them to do the difficult things like submitting the articles on time and at approximately the amount of words asked for, with consummate skill and it is not surprising that a number of them have written to her expressing gratitude for her editorial skills. If she has suggested a change in order to improve an article, it has always been taken in the best way.

I’d like to thank her for making my time as Chairman of the Editorial Board an easy one with never a worry about the progress of the magazine and I wish her all the best in her welldeserved retirement. I am sure I will be joined in that by all the readers of English Bridge.

Elena is pictured receiving her award from EBU Board Member, Heather Dhondy.