The pack should be shuffled (randomly mixed) and cut for dealer (highest deals). Dealer deals out the cards clockwise one by one to the players, so that they have 13 cards each. Dealer for the second game will be the next player clockwise and so on. Please note that many teachers will provide you with pre-dealt hands in bridge boards.

The players sort the cards in their own hand into suits and into sequence within each suit, without showing the cards to the other players. Read more on Sorting a hand.

The value of the hand is worked out by counting up the high card points held, using the following scale:

Note that there are 40 points altogether between the four hands in each deal.

Beginning with the dealer, and then in clockwise order, each player announces how many points his or her hand contains. The partnership with the most points becomes the declaring side who decide the contract. The other pair are the defending side, who try to prevent the contract being made by making tricks themselves. There is a re-deal if the point distribution between the partnerships turns out to be 20:20.

The player with the higher number of points in the declaring side becomes ‘declarer’, and his partner becomes ‘dummy’. If they both have the same number of points, the player who announced points first is declarer. Dummy then lays his or her hand down face up on the table to face declarer, with the suits arranged in columns. 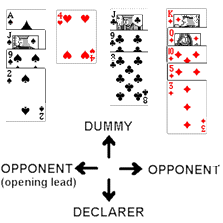 6 - Deciding the contract
Declarer calculates how many tricks might be won in the combined hands and then chooses and announces the contract that seems likely to bring in the best score for the partnership.

Declarer may choose no trumps or a trump suit, and ‘part-score’ (at least 7 tricks) or ‘game’. The number of tricks required for a game contract varies according to the trumps. In no trumps, game means winning 9 tricks. In a suit contract, where spades or hearts are trumps it means 10 tricks, and where clubs or diamonds are trumps it means 11 tricks.
Game contracts score lots of extra points when made, but if the target is not met, then the declaring side scores nothing and the opponents score points instead. Choosing the best contract is therefore a critical part of the game which needs skill and judgement.

If declarer chooses a trump contract, the cards in dummy in the chosen suit are moved to be on the dummy’s right hand side (the left hand end as declarer looks at them).

The player on declarer’s left plays the first card, i.e. makes the ‘opening lead’. Play is in clockwise order and players must follow to the suit led whenever possible. The highest card played wins the trick (unless, in a suit contract, it is beaten by a trump, since trumps outrank the other three suits). If several rounds of a suit are played and a player runs out of cards in that suit, he or she may discard a card from another suit (which cannot win the trick), or in a trump contract can choose to play a trump (which will win the trick unless it is beaten by a higher trump).

Each card is played face up in front of each player in such a way that everyone can see the cards clearly. When a trick is complete, the cards are turned over, players placing the ‘quitted’ cards from their own hands face down on the table in front of themselves in a neat row. To make it easy to see how many tricks have been won or lost, cards in tricks won are placed upright, and cards in tricks lost are placed sideways on. The winner of the first trick leads to the second and so on.

Declarer controls the play of dummy’s cards, telling partner which card to play when it’s dummy’s turn. Declarer’s partner must always play dummy’s cards as instructed, and must keep the cards already played from dummy in correct order and formation. Otherwise dummy takes no part in the play of this particular deal.

When all the cards have been played, the tricks for each side are counted and agreed, and the result is calculated and scored. Players record their score on a score sheet. The session can end when an agreed target total has been reached by one side, or after a set number of deals has been played. Read more on How to Score.

The position of dealer moves clockwise round the table for each game.

It is a good idea to have two packs of cards available, so that the second pack can be shuffled by the dealer’s partner while the first is being dealt. Before starting dealing the next set of hands these cards should be cut by the player on the new dealer’s right.