The Award, in memory of Tony Priday, is given for an outstanding contribution to bridge and enhancing the game in all its aspects. It was presented for the first time in 2015.

When the Covid-19 pandemic started and people were flooding onto the existing online bridge platforms, Graham Hazel and Shireen Mohandes recognised the shortcomings of what was then on offer and they used their extensive backgrounds in technology and gaming to provide something that not only addressed those shortcomings but also went far beyond most of our expectations, allowing us in the EBU to run our congresses in ways that are as close as possible to their live equivalents. In doing so they have also played a real role in helping people to play social bridge, often with those in different parts of the world, and in this way they have helped them survive the worst effects of the pandemic.

This award is made in recognition of the pivotal role RealBridge has played in providing a really social aspect to online bridge as well as providing serious online bridge events with greatly improved security.

Peter wrote his first article in the Daily Mail on 31st January 1966, and his bridge column has appeared in the paper every weekday since. This longevity has already passed the existing Guinness Book record for longest-serving daily newspaper columnist by several years. Aside from writing, he has pursued several worthy causes to the benefit of the game, which has been his lifelong passion. His priority has been to help others improve, and he has always been available for guidance and advice on bridge-related matters. He has also hosted popular seminars at top hotels around the country.

This award is made to John Magee universally known as "Mr Bridge" for his work in popularising duplicate bridge in England and beyond. In addition to running a successful magazine and bridge holiday business he has made significant contributions to clubs across the country affiliated or otherwise and he has helped our game prosper over several decades.

David Ewart is well known to many members as a bridge player, but his Tony Priday Award is given in recognition of an impressive contribution away from the table. When David Harris stepped down as Honorary Consul in 2012, David Ewart, a Queen's Counsel specialising in tax matters, volunteered to take over. When the EBU decided to pursue its VAT claim against HMRC it approached not David, because it was felt that it was a lot on top of his regular support, but his wife, Sarah. Sarah is also a tax barrister and was happy to help, but as the case progressed she fell pregnant and had to withdraw. We looked no further than her husband for maternity cover, and since then he has researched, co-ordinated and pursued the case for us at every level, culminating in an appearance before the European Court in Luxembourg early in 2017. That we now know the claim was unsuccessful does not detract from the amount of work and dedication David has put into it over a period of several years, levying no charge at all for his services, thus saving the members untold thousands of pounds. This was all to get Bridge recognition, and through that recognition not only benefit players, but also to help bring the game to a wider community, with all the health benefits that we know that involves. The EBU Board was unanimous in deciding that in gratitude for his support to this cause, there is no more suitable recipient for the 2017 Tony Priday Award than David Ewart - QC and all-round decent chap.

Presented to Jeff for his contribution of his bridge program which has been available without cost to clubs all over the world, is the basis of EBUScore and also is the basis for all of the EBU scoring programs in its own tournaments over many years. Jeff was on the EBU Laws & Ethics Committee from 2002-2003, is a qualified County TD and a Premier Grand Master. 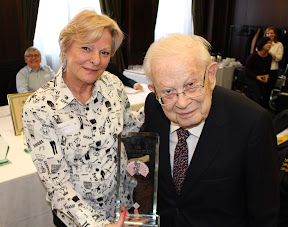 Fittingly the inaugural award was made to a partner of Tony Priday in many international events, Bernard Teltscher. As recently as 2014 they played in the 2014 Teltscher Trophy, with the Great Britain team finishing second, and Tony & Bernard finishing second in the cross-imp scoring. The Teltscher Trophy is the 'Senior Camrose' event, so named as Bernard 'established’ and funded the Senior Camrose event. He has also been a long time sponsor and supporter of the Lederer Trophy event, ensuring its place as one of the most important events on the bridge calendar. Bernard is President of the London Metropolitan Bridge Association, and restarted Cambridge BC, in 1946, which had been dormant during the war, acting as its President. Bernard has been a supporter of many other bridge activities, including supporting university bridge teams, and his generosity is further exemplified by the fact he is the only EBU member to recognise the work of the EBU staff through the giving of a gift at Christmas. Bernard's biography and interview