Young Pair of the Year Award

The Young Pair of the Year Award was created to recognise the outstanding young partnership of the year. The conditions applying to the award are:

Ben Norton and Shahzaad Natt have enjoyed success both as part of England's U26 team, and as a pair in EBU competitions. They were key members of the U26 team which won the Junior Camrose and reached the semi-finals in the White House Junior Internationals event. 2017 winners: Toby Nonnenmacher & Kyle Lam

Toby and Kyle were key members of the U26 team, and the only ever-present pair in the main competitions in which the team competed in 2017. The team qualified from the European Championships to compete in the 2018 World Youth Team Championships, and were emphatic winners of the Junior Camrose Trophy. In domestic bridge in 2017, Toby was part of teams which won the National Swiss Teams and Division Three of the Premier League, and Kyle captained Cambridge University to the institution's, and his, fourth consecutive Portland Bowl title. 2016 winners: Michael Alishaw & Stephen Kennedy

Michael and Stephen have enjoyed success both as part of England's U26 team, and as a pair in EBU competitions. They were part of the England team which qualified for the World Championships through its performance at the European Championships, and were in the team which finished second in the Channel Trophy and reached the semi-final of the White House Internationals. They won the Swiss Pairs at the 2016 Riviera Congress, were part of the winning team at the 2016 Autumn Congress, and were the top pair in the regional finals of the 2016 National Pairs going on to finish fourth in the national final. 2015 winners: Ben Norton & Sam Behrens 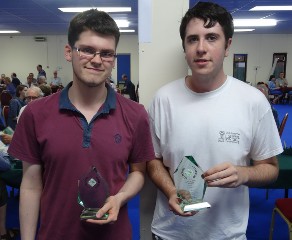 Ben and Sam have been members of the Under 20 squad for a number of years, and in 2015 gave a superb performance in England's victory in the Channel Trophy, in which the team won every match. 2014 winners: Tom Paske & Graeme Robertson 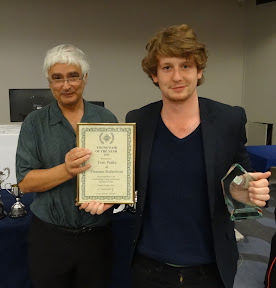 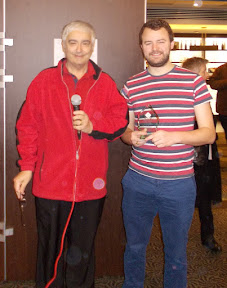 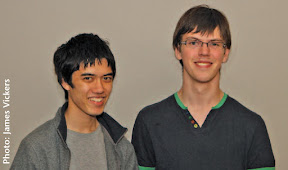 The 2012 award for Young Pair of the Year goes to: Toby Nonnenmacher and Michael Alishaw Toby and Michael joined the squad in 2010 whilst still at school and went enthusiastically into it from the beginning. They started practising and took on board a new system in order to broaden their horizons, and this seemed to do their game plenty of good. They were first selected for the Under 20 team in 2011 for the Peggy Bayer, and then played in several Channel Trophies before making it as one of the anchor pairs in 2012. This was the year they really stood out from the crowd as a leading pair in youth bridge. They achieved some success at Congress level coming second in the Riviera teams congress which was practice for the World Championships in Tai Cang (China) a few weeks later. They gave 100% to the team and were as committed and dedicated as anyone could have asked for, the team reaching the knock out stages before losing to the eventual winners Poland in a very exciting match. Later on in the year they were part of the Under 20 team that helped win the Channel Trophy on home soil, the first win since 2007. The team led throughout and they played all of they key matches against the strong Dutch rivals. Although doing well as national and international level is important, it is their actions away from the bridge table that distinguish them as true role models however. Few players conduct themselves as well as Toby and Michael, both at and away from the table. They are always supportive to their team-mates and to less experienced members of the squad. They have helped make training weekends in London much easier by putting many people up at their houses, even new players who they have never met but have made feel welcome. They are always eager to listen and learn, and they accept when they are wrong in an effort to improve. Their patience and kindness towards less experienced squad members is matched only by their keenness to improve, and they are always easy to captain and get on well with their team and the opposition alike. (Often at the end of training weekends when everyone prepares to go home they sit down with a pack of cards and invite anyone who wants to to play rubber bridge in the evening.) The sign of true bridge players, when they come out of a set of bridge, no matter how long or short, easy or hard the first thing they always ask is if they could have done any better. 2011 winners: Shivam Shah and Basil Letts 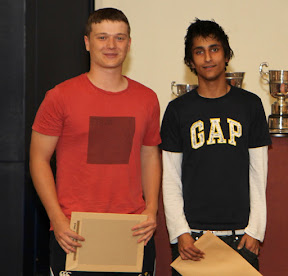 The 2011 award for Young Pair of the Year goes to: Shivam Shah and Basil Letts The Young Pair of the year award for 2011 is given to a pair whose excellence at the bridge table is matched only by their attitude and behaviour, which has been a credit to the squad and the EBU. 2011 saw them have a fantastic year, starting with a record score in the Peggy Bayer when they scored 223 VPs out of a theoretical maximum of 225. Amazing achievement. Afterwards, they competed in the White House tournament, where their individual butler score was one of the highest achieved by an England pair. However, it was in the European Championships held in July in Albena, Bulgaria that they really showed how good they were. They played every single board, carrying the team to a record fourth place, qualifying them for the World Championships held in China this year. They are the perfect bridge team players too - they never seek to criticise or blame any of their team, or each other. They enjoy a laugh and joke whether their results are good or bad, and their only aim is to improve as a partnership. 2010 winners: Tommy Brass & Alex Roberts

The 2010 award for Young Pair of the Year goes to a young pair who have made great progress in a short period of time: Tommy Brass and Alex Roberts. Despite only joined the squad in the autumn of 2009, 2010 has seen them achieve many good results, particularly at the European Youth Pairs where they narrowly missed out on a medal in the last few boards, and at the Channel Trophy where their slam bidding was responsible for many swings to England. Their attitude is always positive, and even after a poor result the only thing you will see is laughter - and maybe a sheepish grin! English Bridge, October 2011 2009 winners: Alice Kaye & James Paul 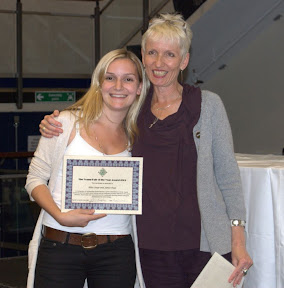 Alice receiving the award from EBU Chairman, Sally Bugden This year's young pair of the year award is awarded to Alice Kaye and James Paul. In 2009 they cemented their university partnership with a string of successful results. In the April they were part of the team that won the Portland Bowl for Oxford University, the British University Championships that qualified their team to represent England in the European teams championship in Croatia in October. Only a few weeks later they did tremendously well in reaching the final of the Punchbowl at the Spring Fours, coming back from a huge amount down at half time to close within only a few imps. Their opponents were a star studded team of internationals including Ralph Katz (only a few months before he won his first Bermuda Bowl). One of the current England European team commented how impressive it was that they were able to get back into the match using controlled aggression in so few boards. At the end of the Year Alice and James had their crowning achievement when they were part of the team to win the Under 25 Channel trophy for England for the first time in 14 years. Despite an unlucky start where they were actually lying 4th after a few matches they showed true English grit and won in the final set. Michael Byrne 2007/2008 winners: No award made 2006 winners: James Thrower & Tom Rainforth 2005 winners: Nicola MacDougall & Alex Morton / Tom & Ben Paske / James Thrower & Tom Rainforth 2004 winners: No award made 2003 winners: John Atthey & Laura MacDougall The Young Pair of the Year Award was created to recognise the outstanding young partnership of the year. John Atthey and Laura Macdougall have been named as Young Pair of the Year for 2003. For the Young Pair of the Year the awarding committee has recognised John and Laura's overall achievement in 2003 in winning the Under 19 pairs Championship and being part of the victorious team that won the Peggy Bayer trophy in January this year. 2002 winners: Jonathan De Souza & Paul Wilson The Young Pair of the Year Award was created to recognise the outstanding young partnership of the year. Paul Wilson and Jonathan De Souza have been named as Young Pair of the Year for 2002. Jon, who has just had his 19th birthday, and Paul, almost 18, have been playing together for several years and achieving some great results. In 2002 they won the Under-19s Pairs Championship, were second in the Peggy Bayer trials and second in the Schools Cup playing for Loughborough Grammar School. These results alone could have been enough to justify this award, but it was also made in recognition of the pair’s sustained level of achievement over a number of years. Their win in the Under 19s Pairs was their third successive win of this competition – they first won in 2000 when Jonathan and Paul had just turned 16 and 15 respectively. And they won the Schools Cup convincingly in both 2000 and 2001. In each of those years they narrowly missed out on the Young Player or Young Pair award by being pipped by other contenders, but this year they have received their due recognition. Paul is still at school in Loughborough but Jon has now gone on to Trinity College, Cambridge. The pair still get together regularly to play bridge, however, as they are members of the current junior Under-20 squad. This year they have already shown their form, by being part of the successful English team that won the Peggy Bayer Trophy in January. English Bridge, April 2003 2001 winners: Michael Byrne & Alex Morris This year, the EBU decided to award Young Pair of the Year to Michael Byrne and Alex Morris. Michael, 21, from Reigate first came to prominence in 1999 when he persuaded his inexperienced schoolmates to enter a team in the Schools Cup, which confounded everyone by going on to win the Schools Plate. He is now at Manchester University, which is how his partnership with Alex Morris came about. Alex, still short of his 17th birthday, has been playing in under 25 events rather than under 20 in order to partner with Byrne. " "Together, Alex and Michael came fourth in the under 25 trials and were members of the successful Peggy Bayer team. The partnership's crowning achievement was to win the Great Northern Swiss pairs, beating an international studded field of 195 other pairs." English Bridge, August 2002 1995 winners: Lior Zivan & Jonathan Starkings