The hands below were dealt in a game of Minibridge.
Why don’t you give it a go?
The dealer was West. 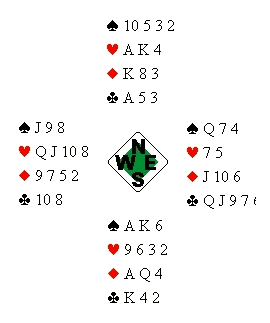 You may find it helpful to take a pack of cards and lay the hand out on the table when working out the play.

2. West announces his points first because he is dealer.

3. North/South are the declaring side. They have thirty points between the two hands whilst West/East have only ten points in the combined hands.

4. South is declarer because he has the most points. North is dummy because dummy is always the hand opposite declarer.

5. West makes the first lead because he is to the left of declarer.

6. The defence should lead hearts, because West holds a solid sequence and the lead is safe. Even though North has the ace and king, it will not give declarer a trick that is not his by right. The queen is the card that is usually led from Q J 10. Lead the top card of the sequence to tell partner about your holding.

8. Yes. With nine top tricks in no trumps, declarer should certainly go for game.

9. Yes. Declarer and dummy have more spades than the defenders. If the defenders' spades break with three in each hand, as they do, declarer can play three rounds of spades, winning two and losing one. He will then be left with the last spade in dummy and this can win a trick.