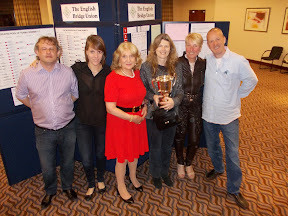 Congratulations to the Sinclair team - Anita Sinclair, Andrew McIntosh, Zia Mahmood, Marion Michielsen, Sabine Auken and Roy Welland - who have won the 2014 Schapiro Spring Foursomes. The international team, featuring players from England, the USA, Germany and The Netherlands, overcame the number two seeds Allfrey in an epic final on a day that featured an exhausting 12 hours of play.

Earlier in the day Sinclair had defeated the number one seeded Italian Lavazza team, while in the other semi-final the previously undefeated Hinden team lost to Allfrey after they took up the option of playing an extra 8 boards. You can see all the results and team listings from the event at our results pages.