We are delighted to announce that from January 2021 we have a new partnership with First For Bridge.

Our first overseas congress with First for Bridge will take place in Malta, from 3rd - 9th February 2021. The holiday is being held at the wonderful Db San Antonio Hotel & Spa, in the heart of Qawra, on the North of the Island.

Given the current climate you may just wish to register an interest with First for Bridge Congress and confirm travel plans at a later date.

Starting Sat 4th April we are adding a new daily 12-board game to our schedule, played at 5 minutes a board for those who find our usual games too slow.

We now have received the data that allow us to process games for master points and NGS as intended and they should soon be up to date. Any players who don't find their session showing on My EBU should send a message on BBO to the EBU TD with their EBU number.

For the last few years the EBU has had a scheme whereby clubs could apply for financial assistance for up to half the cost of items of capital expenditure that they would otherwise have difficulty affording, as described in last year’s information about the scheme.

It was intended that the scheme would run again this year on the same basis and today is when we would have been inviting applications. However, the current situation with COVID-19 means that we have decided not to do so this April. Not only are the EBU’s finances under great pressure in the current climate, but it is also unlikely that many clubs will consider capital expenditure to be their priority right now. We hope that clubs and members will understand this decision and we hope to be able to reintroduce the scheme at an appropriate time when the current situation is behind us.

March's competition for our online games, hosted by Funbridge, has concluded.

In the main March matchpoints ladder, David Dawson finished top of the leader board. His best six scores in the month averaged 67.95%, and he wins £30. Second place was claimed by Dominic Connolly with an average score of 65.83%, he wins £20. There were also cash prizes for third to fifth places.

In the handicap ladder, for the players whose scores exceed their NGS by the greatest amount. Paul Hawkins finished top of the leader board over the top six games, with a handicap score of 10.25, winning £25. The second place prize went to Bryn Smith with a score of 7.76. There were also prizes for third and fourth place.

The inaugural quarterly IMP competition for our online games, hosted by Funbridge, has concluded.

For the first quarter January to March, Liz Clery finished top of the leader board. She scored 361 IMPs from the total of her best six games, and she wins £30. Second place was claimed by Matthew Covill with a score of 358 IMPs, he wins £20. There were also cash prizes for third to fifth places.

With an incredible 168 team entry, the new EBU Lockdown League kicked off on Monday evening, with the first of 13 rounds of 8-board matches. Teams have been seeded into 12 divisions of 14, with a 4 up/4 down promotion/relegation system. Matches are scheduled to be played on Mondays, Wednesdays, Fridays and Sundays.

We wish all teams the best of luck and, above all, a fun distraction from our current lack of face-to-face bridge!

Please be aware that The Bridge Warehouse is now closed for the foreseeable future.

The April 2020 issue of English Bridge is out now and will be delivered to eligible members in the next few days.

Well, we’re not quite 100% locked down, but it feels like it. The streets are deserted, supermarkets are counting people in and out, and we’re getting used to speaking to people from six feet away. This, in time, will pass. The world we wake up to will be different from the world we know. We will have got used to a different type of behaviour, and to doing different things.

Archive of all news 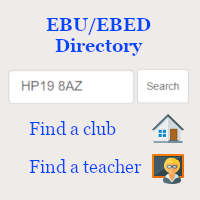 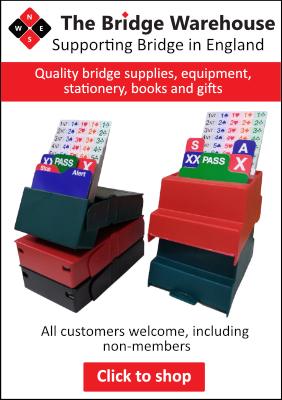