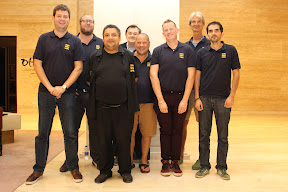 England's Open team have suffered back-to-back 'last board' defeats to finish fourth in the World Championships.

After completing the round-robin phase in fourth, they beat USA1 in the quarter-final. The semi-final against Poland was a dramatic match, with numerous swings, before all hinged on the final board. When each Polish pair made a partscore they took the lead for the final, and decisive, time. They had won by less than 2 IMPs - a tiny margin after 96 boards. To make matters more dramatic a ruling was required on a board from earlier in the day. This subsequently went in Poland's favour - and then was re-evaluated, though again the ruling going Poland's way. The result was only confirmed well after the cards had been put away. You can see David Gold's discussion of the board and ruling here.

In the bronze medal match England fell behind on the first day, but turned things around on the second day, and playing the final boards they had a small lead. Unfortunately they were again to see the lead slip away on the final board, and they ultimately finished fourth.

This was a cruel way to finish for a team which had given so much over the previous two weeks. They can, however, be very proud of the way they played. Congratulations and commiserations to Justin Hackett & Jason Hackett; David Gold & David Bakhshi; Andrew Robson & Tony Forrester; NPC: Simon Cope; Coach: Andrew Murphy.

Simon wrote a blog throughout the tournament which you can read here.