Scenario: somebody unfamiliar turns up at your club. What do you do?

Newcomers to the EBU

These people do not have any kind of an EBU record. They have never been a member of the EBU, they have never bought something from the shop, they have never entered an EBU event or attended an EBU training course. Perhaps they're brand new to EBU bridge, or maybe they're visiting from overseas.

These people fit into two categories:

They have no intention of ever joining the EBU

Simply mark them as a guest when you upload the session file to the EBU. This means they won't get any masterpoints, and they won't get an NGS adjustment (and nor will their partner) but presumably this is fine if they have no interest in becoming an EBU member.

Note that members of foreign unions will need to have an EBU record in order to earn masterpoints. Follow the instructions in the next section to create a Potential Member.

They may wish to join some day

For this you'll need to get them an EBU number since they cannot earn masterpoints without one. You can create them as a Potential Member. Go through the same procedure as making a new member, but untick the box that says This new person is a member of your club. This will give them a temporary number and within 24 hours they'll have a permanent EBU number. If they come to the club again you should be able to find their new EBU number via a search.

Now, if they ever do decide to join the EBU, their NGS grade and earned masterpoints will be waiting for them.

Newcomers to the club but not to the EBU

These people do have an EBU record and they will want to earn masterpoints and get NGS adjustments when they play at your club. Ask them for their EBU number. If they don't know it, ask them for some basic details about them so that you can look it up when it's time to submit the session file.

You may think it's simpler to just mark them as a guest, but our experience has shown that this is not a good idea.

How to tell the difference

Ask them! They might not know if they are currently an EBU member, but they will know if they've been one in the past. If they have an EBU record, but you do not know what it is, do not create a new one for them. That will just create a duplicate and make matters worse.

This flow chart describes how to proceed when a new player turns up at the club. 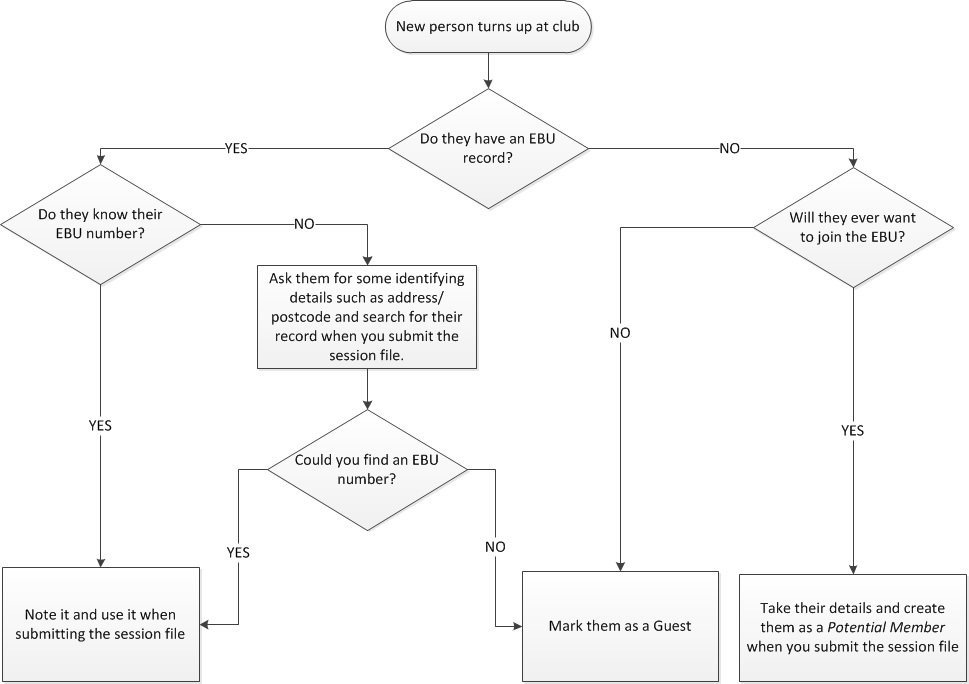